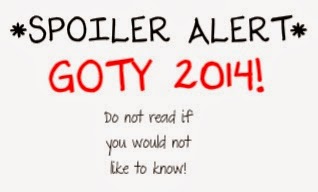 *SPOILER ALERT*
If you would not like to know who Girl of the Year (GOTY) 2014 is, please click away.

I can't believe it!  Pictures of Girl of the Year 2014 has been released!  First of all, it is NOT yet confirmed these are the acutal Girl of the Year (GOTY) pictures.
So far, we know GOTY 2014 is going to be a ballerina and her name will be Blanche Palmer, but now.....

Let me present to you...ISABELLE!  I love her hair, it even comes with a hairpiece!  Her hair is golden-blond, and has a slight wave at the end.  Her eyes look a little bit hazel.  Her outfit looks like a pink shirt with a ballet dancer on it with sequins, and some grey sweat pants.
We aren't sure what her last name will be yet, but it could be Isabelle Palmer.
What do you think of GOTY 2014?
~Hope
Posted by Unknown at 1:01 PM